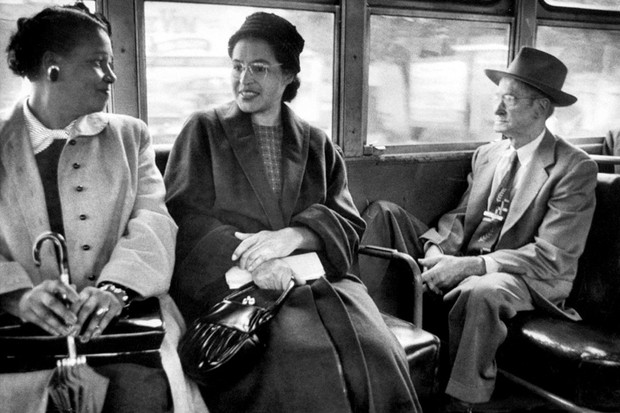 Recently, while watching television I happened to come across a documentary about the life achievement of Rosa Parks, an American activist, which truly motivated me to do some research on her as she seemed extremely important to me.

Rosa Parks was born in Tuskegee, Alabama and had African – American origins. She was married to a barber from Montgomery and together became respected members of Montgomery’s large African – American community. However, coexisting with white people in a city ruled by “Jim Crow” laws was frustrating since a few of the restrictions were that blacks could attend only certain schools or could borrow books only from the “black” library. Moreover, in December 1943 Rosa joined the Montgomery chapter of the National Association for the Advancement of Coloured People (NAACP) and became chapter secretary.

Meanwhile, Montgomery had passed a law that segregated every bus passenger based on his or her race. According to the law, white people boarded the bus through the front door and after dropping their coins into the fare box next to the driver, they sat in one of the first four seats, which were reserved for whites. On the other hand, black people boarded the bus through the front door, dropped their coins into the fare box and then had to get off the bus and get back on through the door in the back of the bus. Buses had “coloured” sections for black people in the back seats, which were determined by a movable sign. In case of white passengers needing more seats, blacks had to move further back, stand or even leave the bus. Furthermore, black people could not sit across the aisle in the same row as white people.

Rosa Parks, however, became well-known when on December 1, 1955, while commuting home from a long day of work at the Montgomery Fair department store, she boarded abus and took a seat in the first of the rows designed for “coloured” passengers. As the bus continued on its route, it began to fill with white passengers, and the bus driver noticed that several of them were standing in the aisle. Then the driver stopped the bus and moved the sign, asking four black passengers to leave their seats. Three of the other black ones obeyed, but Rosa refused and remained in her seat because she was tired of giving up and was later arrested by the police, who charged her with violation of the law, but she was eventually released on bail.

Rosa Parks faced continuous harassment after that event and since she left her department store job and her husband was fired, she decided to move to Detroit, where she continued to support civilrights events. Due to the event in the bus, Rosa became an international icon of resistance to racial segregation and fought her entire life for racial equality and women’s rights and was also given five different awards.

After my research I realized that just like when Rosa Parks objected to the law and helped all black people live in equality, sometimes all it takes is one person to reverse an unpleasant situation.